Be the change you want to see – Gandhi

How hard can it be to admit that you made a mistake?  Or that what you thought was working, just is not doing the job?  How difficult is it to look critically at what you are doing and determine that something else might be better…or that you really don’t need to do this anymore?

Apparently, for both people and organizations, this is very, very difficult.

But, if we are to move forward, being able to admit that what might have been working at one point in time is just not working now is an essential skill.

This is hard.  We like to believe that our work, whether paid or volunteer, is meaningful and productive.  We want to impact the world and make it better.  And, over time, we develop personal and organizational strategies to carry out our missions.  Some are highly effective.  Some are not.  Some worked well in the beginning…but times have changed.

Most organizations have missions that they will chip away at over time, but probably never completely accomplish.  Missions and visions should always have some “reach” in them, but often what is desired is either completely out of reach, or not truly a viable goal in these changing times.  What about others whose missions are similar (or even the same) as yours?  Is it best, in the nonprofit world, to try to “out-do” and compete with others around similar goals?  Determining if an organization is truly effective and competent in what they do is a difficult task.  When there are 10 coffee shops in a two block radius, does it make sense to open the 11th?  The same is true for nonprofits.  If there are some highly effective organizations doing what your organization struggles to sustain, perhaps it is time to re-think your place on the block.

When the March of Dimes set out to eradicate polio, they dreamed of success over time. When that success was achieved, they were left with a dilemma.  Was their work done?  Did they now take a bow and fade into the sunset?  They chose to re-think their mission and re-invent themselves and their mission.  They are now a leader in the prevention of birth defects…a mission that, unfortunately, may not be “cured” as quickly as polio.  They had a highly effective infrastructure that they were not prepared to disband.  Instead, they chose to re-focus.  It took a brave, strategically thinking organization to make this dramatic change.

Being wrong can be viewed as a positive if it positions you to make change and not repeat or replicate what is not working or what is already being done well by others.  The hardest part of any journey is the first step.  Sometimes that needs to be a step back to truly access your purpose and how to deliver on it.  Sometimes that can be a total reinvention (a la March of Dimes) and sometimes it involves a narrowing of focus to what you do best and to what you are most passionate about.  And sometimes it can mean shutting your doors and supporting the work of others.  All are valid responses to knowing that something is wrong.  The only wrong answer is clinging to what is not working.  Saying “I was wrong” is often what is right.

Using Strategic Thinking as a Platform for Planning: Before, During, and After

Strategic thinking and strategic planning can be seen as separate functions. But, together they are a powerful tool for building highly effective organizations and people.

Strategic thinking is about:

All of the good planning, using the best of information and taking all of the time needed to make sure new ways work, cannot guarantee an organization will fulfill its mission more effectively and that those it serves will be served more effectively.

Moving from the known and comfortable to the new and unsure may seem too risky. It certainly will feel uncomfortable for all.

For organizations that have vital responsibilities to the people they serve, the recognition that there are no guarantees can raise the fear that changes that do not work will result in clients being served less effectively; that fear can stop an effort to meet the challenges before an organization even gets started.

In the world of Non-profit organizations which provide critical human services this is a fear that effects staff and volunteer alike. The stronger the vision and the deeper the commitment they have to the work, the stronger the fear can be.

But while there are no guarantees that new approaches and methods will be better than present efforts, there is also great risk in doing nothing in the face of declining effectiveness. Standing still in the face of struggle will result in continued struggle and growing ineffectiveness.

The organizational choice is between continuing to operate poorly and taking the risk of trying new ways that may work but have no guarantee of success.

The answer to this dilemma is to see change as not a one-time event but as part of an ongoing process of continuous improvement.

The need is for organizations to see themselves as constantly evolving organisms. Organizations (and their leaders) need to see change as a continuous effort to fulfill their purpose in the face of never ending change in their environment.

If the goal of planning and making change is to reach the perfect answer so that the next 100 years have been shaped, here is our advice: Don’t start! It will not happen.

The best way to confront fear of change is to never stop changing! 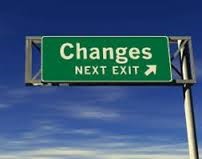 Years ago, when I was first working nationally with nonprofits in need of training and technical assistance, I came across an unattributed quote.  It stated:  Change is good… You go first!   Today, when I goggled that statement, I got 778,000 results.  Clearly there is an interest, perhaps a “market” for change.  But to what end?

I looked through some of my past materials to find how I used that quote and there it was – on a very nice overhead slide.  Obviously, I was using it before the advent of Power Point.  It always got a laugh from those who viewed it, whether in a training or in a more formal lecture, but I was never sure of just how or if it pushed others’ thinking.

Today, as I approach my work and volunteerism with nonprofit organizations, the issue of change is ever-present.  It is discussed, questioned and given high priority…but I am not sure that it is really embraced.  We are a nostalgic people.  We tenaciously hang on to what we have done and been and hesitate to take the risks involved in real change.  We rarely ask the really hard questions: What are we about?  Why do we exist?  What is our purpose?  The answers to these questions might be dangerous to what currently exists… But these answers might be the determinant of a better future for what nonprofits seek to do.

Understanding purpose is an integral part of being an effective organization (or human being for that matter!).  It helps us to keep our focus, do our work more efficiently and weed out what is superfluous to our mission and vision.  But often organizations continues to do things that are no longer relevant or effective in the name of “sustainability” or because they have a funding source.  If they cease doing something it could mean that what they are (their purpose) is no longer what it was.  This is the scary part of change.   It can lead to organizations stepping back from what they have done for years.  It might lead some into new, more relevant and effective areas; some into mergers and collaborations with others who also do similar work; and some into closing their doors.  All of these options require courageous leadership (something I hope to write about soon) and risk-taking and, of course, change.  These kinds of change are not easily accepted.  They require careful outreach, discussions with funders, constituents and communities.  They require thoughtful planning and marketing.  But… when done well, they provide communities and constituents with services and resources that are current, relevant and truly make a difference.

So…  I am now reminded of a second, often quoted and seldom attributed quote (also on a very dated overhead):  If we do what we have always done, we will get what we have always got.  (It only had 289,000 results on Google!)  Perhaps it is time to change.  I’m ready.  Anyone want to go first?